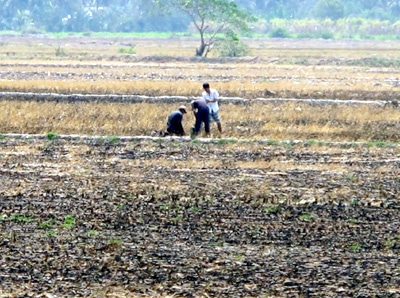 Disease outbreaks among crops could also occur, the Ministry of Agriculture and Rural Development said.

To deal with emergencies, local plant protection and cultivation departments have been told to monitor weather conditions.

The ministry has also urged them to develop more large-scale rice fields, which could help farmers’ gain outlets for their products and improve rice quality for exports.

Farmers are currently planting the rest of the planned 1.68 million hectares for the summer-autumn rice crop, according to the ministry. The Delta targets an average yield of 5.5 tonnes per hectare for the crop.

Although the price of rice seeds is VND1,000-1,500 a kilo lower than the same period last year, due to lower food prices, there is no seed shortage, according to Ngo Dinh Thuc, deputy director of the Kien Giang Province’s Agriculture Fisheries and Forestry Breeding Centre.

The Delta currently needs 190,000-200,000 tonnes of rice seeds for the crop, local agriculture officials have said.

Trinh Van Thang, owner of Hung Phat Rice Seeding in Can Tho City, said the decline in paddy prices this year had affected rice-seed demand. In addition, many farmers had planted their own rice seeds for the summer-autumn crop, he said.

Also, about 65 per cent of rice seeds are produced during the winter-spring crop season because of favourable weather conditions, according to rice seed producers.

An Giang has been successful in urging farmers to produce rice seeds, and as a result, it has more than enough for use and sale to other provinces. An Giang produces more than 75,000 tonnes of rice seeds a year.

In Ca Mau Peninsula, high quality rice seed varieties that are highly disease-resistant and saline-resistant have been provided to farmers.